This webpage is a portal to information about Ocean Beach, including plans, studies, and projects that support this vital area of San Francisco. There are a number of city, state, and federal agencies working on various efforts at Ocean Beach to adapt to climate change and coastal erosion. Recognizing the importance of coordinating on these efforts, these agencies have come together to form the Ocean Beach Coordination Team. The Team is coordinating closely on a variety of projects in the area and on communication with affected communities.

Area Overview and Infrastructure at Risk

Ocean Beach, a 3.5-mile stretch of sand along San Francisco's rugged Pacific coast, is one of the gems of the city's landscape. It draws a diverse population of more than 300,000 visitors each year and is an important piece of the Golden Gate National Recreation Area. Ocean Beach is also home to major elements of San Francisco's wastewater and stormwater infrastructure.

San Francisco has a combined wastewater and stormwater system, meaning that stormwater runoff is processed through the same system as wastewater from sinks and toilets. Learn more about San Francisco's combined sewer system. On San Francisco's west side, gravity brings combined flows to the Westside Pump Station, where it is pumped to the Oceanside Treatment Plant. You can view an animation video of the Westside wastewater system here. The Oceanside Treatment Plant and related facilities - completed in the early 1990s - were built to protect coastal water quality and bring San Francisco in compliance with the Clean Water Act. This combined sewer and stormwater system has reduced the number of discharges into coastal waters by 90% and is a model of environmental performance.

Ocean Beach is a challenging setting, with storm-driven waves contributing to erosion of coastal bluffs. As climate change causes sea levels to rise, erosion is expected to worsen, further threatening coastal infrastructure like roads and sewers, and causing the beach to narrow. At South Ocean Beach, shoreline erosion already has resulted in the closure of parking areas and a southbound lane of the Great Highway between Sloat and Skyline boulevards and is threatening the most seaward component of the combined sewer system — the Lake Merced Tunnel, a fourteen-foot diameter pipe under the Great Highway. Other components are located just behind the tunnel. To address erosion and sea level rise threats to this critical infrastructure, SFPUC participated in the development of the Ocean Beach Master Plan (more detail below) and subsequently published a Coastal Protection Measures & Management Strategy Report.

City, state, and federal agencies are working together with beach users and community members to adapt to these coastal changes and to protect critical infrastructure while supporting open space, recreation, and natural habitat.

Since 2010, there has been an extensive interagency and public process to develop the Ocean Beach Master Plan, a comprehensive vision to address sea level rise, protect infrastructure, restore coastal ecosystem, and improve public access. This Master Plan, published in 2012, contains over forty recommendations grouped into one of six Key Moves and organized by three geographical reaches. These recommendations are designed to be implemented incrementally over a period of decades.

* This move was ultimately removed from the Plan.

As a result of these planning efforts, a number of projects are currently underway that will implement aspects of the Ocean Beach Master Plan in the South Reach (e.g., changes to roadway south of Sloat, changes to public access, and coastal management) and prepare Ocean Beach for a changing climate. These projects, implemented by members of the Ocean Beach Coordination Team, are designed to address sea level rise and coastal erosion and improve safety, access and connectivity in the South Ocean Beach area by making changes to roadways south of Sloat Boulevard and implementing coastal improvements. More information on these projects is included below. 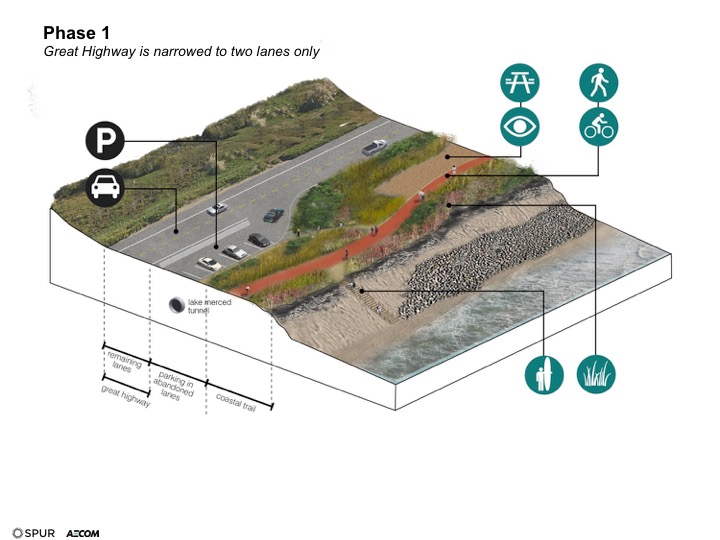 The projects detailed below will make changes to the intersections in the vicinity of the Great Highway between Sloat and Skyline Boulevards. This series of projects work together to increase resilience, improve safety, equitable access, and transit reliability, and reduce vulnerability to coastal hazards. Our managed retreat approach to climate change includes making long-term changes to increase the resiliency of south Ocean Beach and minimizing the impacts of sea level rise. It also includes improvements to local intersections that enhance safety, connect neighborhoods to local open spaces, and build a more resilient shoreline.

More information about the Sloat and Skyline Intersection Improvements Project can be found here.

More information about the Sloat Boulevard Quick-Build Project can be found here.

The Fort Funston Trail Connection Project proposes to construct a trail between the new parking area at the intersection of Great Highway and Skyline Boulevard after completion of the Ocean Beach Climate Change Adaptaqtion Project and proposes to connect to the Fort Funston trail network, closing a gap in the California Coastal Trail. This project would be implemented by the National Park Service but includes partner agencies, stakeholders, and the public in its planning, compliance, and design. Additional information will be made available once the project enters the planning phase.

More information about this and other National Park Service projects at Ocean Beach can be found here.

CCSF has been actively engaged in Ocean Beach planning efforts for many years. The Ocean Beach Master Plan (OBMP) was completed in 2012. It was an interagency effort to develop a sustainable long-term strategy for Ocean Beach. The OBMP presents 6 key moves that are organized by geographical reaches and designed to be implemented incrementally over a period of decades. CCSF’s current efforts focus on South Ocean Beach and include 2 of the 6 key moves; 1) removal of the Great Highway between Sloat and Skyline boulevards and 2) the introduction of a multipurpose coastal protection/restoration/access system. This project will comprise of the concepts developed through the OBMP and include elements such as managed retreat, structural protection, access and recreation improvements, and beach nourishment through the placement of sand. In addition, this project will address California Coastal Act requirements to remove existing shoreline armoring placed during large storms by CCSF to protect the Great Highway.

Consistent with the recommendations in the OBMP, this work is necessary to protect the integrity of wastewater assets built to protect public health and the environment, including the Lake Merced Tunnel (LMT), the Westside Pump Station and the Oceanside Treatment Plant. The Project is being implemented in three phases: Short-term Improvements Phase, United States Army Corps of Engineers (ACOE) Beach Nourishment Phase, and Long-term Improvements Phase. Each of these phases is described in more detail below.

The Short-Term Improvements Phase provides interim protection and improved beach access while the Long-term Improvements Phase is under development. The Short-term Improvements Phase involves beach nourishment activities (e.g. sand backpassing) and installation of sandbags along the southern portion of Ocean Beach fronting the Great Highway. This work is a critical environmentally-friendly approach that is protecting public infrastructure and improving beach access while the Long-term Improvements Phase undergoes environmental review, completes design, and is ready for implementation. Potential annual sand replenishment and associated activities in this Phase are informed by annual monitoring efforts required by CCSF’s Coastal Development Permit. A monitoring report has been completed and is being reviewed by the California Coastal Commission for 2022/23 proposed winter activities to protect public infrastructure and maintain the Army Corp of Engineers sand placement which was completed in 2021.

The ACOE Beach Nourishment Phase involved designing and implementing activities that moved dredged sand from the San Francisco Bay Main Ship Channel (approximately 260,000 cubic yards) that is currently placed offshore to Ocean Beach south of Sloat Boulevard. This work beneficially used the dredged sand to minimize storm damage and protect the beach, infrastructure, habitat, and recreational access to the beach. Implemented in partnership with the ACOE, this Phase works in conjunction with both the Short and Long-term Improvements Phases to protect South Ocean Beach. Design and environmental review for the ACOE Beach Nourishment Phase was completed and can be accessed here. Construction was completed in summer 2021 and lessons learned will inform future efforts.

The Long-term Improvements Phase is the result of extensive planning and analysis work, (e.g., Ocean Beach Master Plan and Coastal Protection Measures and Management Strategy) which is captured in the completed Alternatives Analysis Report and the Conceptual Engineering Report. This phase of work is expected to involve the implementation of coastal management strategies that include managed retreat (i.e., recontouring the bluffs and removing the Great Highway between Sloat and Highway 35), removal of rubble and revetment rock from the beach and bluffs, continued beach nourishment, and installation of a low-profile (buried) wall to protect the Lake Merced Tunnel and associated assets (see figure at right, from 65% design). This work will not only protect vital public wastewater infrastructure, but will also improve access, recreation, and habitat at South Ocean Beach. The Long-term Improvements Phase is currently in the design and environmental review phase, and the Draft Environmental Impact Report (EIR) for the Ocean beach Climate Change Adaptation Project was released on December 8, 2021 and can be viewed here. The Responses to Comments document (Final EIR) is anticipated to be published in spring 2023. Construction is expected to begin in early 2024 and last for 4 years.

Other Work in the Vicinity

The San Francisco County Transportation Authority conducted the District 4 Mobility Study to explore ways to increase the use of transit, walking and biking in the Outer Sunset and Parkside neighborhoods. The study included an evaluation of transportation and open space impacts and benefits of alternative concepts of the Great Highway from Sloat Boulevard to Lincoln Way. This component was conducted in partnership with the Recreation and Parks Department and SFMTA. The final reports for both the District 4 Mobility Study and the Great Highway Concepts Evaluation Report were completed in Summer 2021.

In the fall of 2022, the Transportation Authority will follow up on the Mobility Study to develop a business plan for an on-demand Community Shuttle in District 4. This business plan will identify potential service models and establish the operating requirements of a successful service, including identifying key destinations in the district and estimating ridership.  The plan will outline the operating costs of the service and propose funding strategies.  More information can be found here.

In April 2020, as part of the city’s COVID-19 response efforts, San Francisco temporarily repurposed the Upper Great Highway (between Lincoln Way and Sloat Boulevard) to be a car-free street that prioritizes families, people on bicycles and pedestrians. In mid-August 2021, the Great Highway between Lincoln Way and Sloat Boulevard was opened to vehicular traffic on Mondays at 6 a.m. through Fridays at 12 noon while being used as a car-free coastal promenade for walking, running, playing, or riding from Fridays at 12 noon until Mondays at 6 a.m. On holidays, the Upper Great Highway is also closed to vehicular traffic.

Please direct any inquiries to planningnews@sfgov.org