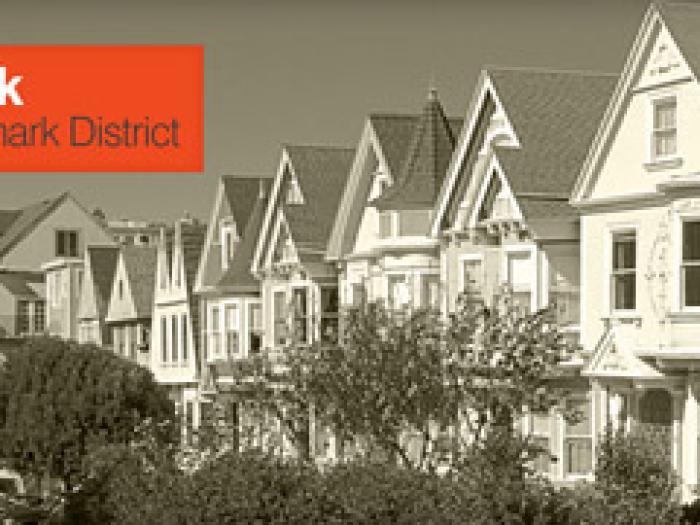 Buildings within the Landmark District were constructed on land originally set aside as a public park. Litigation related to squatter's rights resulted in the partial subdivision of the original park (Duboce Park) into smaller, builder developed parcels. Many of the houses and flats were developed by Fernando Nelson, a prolific Victorian-era builder known for his exuberant ornamentation.

Overview of the District

During the Market and Octavia Area Plan survey effort, the Duboce Park District was identified as a historic district for its exceptional and remarkably intact architectural character. On June 15, 2011, the Historic Preservation Commission added the Duboce Park Landmark District to its Landmark Designation Work Program for local designation. Properties that are designated local Landmarks are regulated under Article 10 of the Planning Code.

The Duboce Park Landmark District contains nearly 90 residential buildings and the park itself. Construction dates for the vast majority of contributing buildings within the Landmark District range from 1899 to approximately 1905 – this short period of development resulted in a remarkably uniform streetscape of Victorian- and Edwardian-era houses and flats of similar design and proportion. Buildings within the Landmark District were constructed on land originally set aside as a public park. Litigation related to squatter's rights resulted in the partial subdivision of the original park (Duboce Park) into smaller, builder developed parcels. Many of the houses and flats were developed by Fernando Nelson, a prolific Victorian-era builder known for his exuberant ornamentation.

The Historic Preservation Commission, the Planning Department, and the Duboce Triangle Neighborhood Association applaud this community-initiated effort to tailor a Duboce Park Landmark designation that celebrates and preserves the history and exceptional architectural character of this historic neighborhood.

Please note: events and meetings information is for reference only as part of the project timeline – these events have ended.

Thank you to all who participated in the Duboce Park Landmark District Mills Act Clinic. The Department is currently coordinating with the Assessor's Office to create an FAQ sheet in response to your questions.

On May 21, 2013 the full Board of Supervisors voted to approve the proposed Duboce Park Landmark District.  A second hearing at the full Board of Supervisors will be heard in the coming weeks, possibly as early as June 4, 2013, and the proposed legislation will be forwarded to Mayor Ed Lee shortly thereafter. There are no opportunities for public testimony at full Board hearings, nor will the Planning Department make a presentation. Board agendas are found here: https://www.sfbos.org/meeting.aspx?page=2315

On May 13, 2013 the Land Use and Economic Development Committee voted to forward a recommendation for designation of the Duboce Park Landmark District to the full Board of Supervisors. Supervisor Scott Weiner added an amendment to extend the Mills Act application deadlines to October 2013 for contributing district properties.

The proposed District will be considered by the full Board of Supervisors at a May 21, 2013 hearing. There are no opportunities for public testimony at full Board hearings, nor will the Planning Department make a presentation. Board agendas are found here: https://www.sfbos.org/meeting.aspx?page=531

Board of Supervisor's Land Use Hearing – 1:30pm, May 13, 2013 (confirmed)
Supervisor Scott Wiener has scheduled a hearing at the Land Use Committee to consider adoption of the proposed Duboce Park Landmark District. Residents, property owners, community stakeholders, and members of the public are invited to share their opinions at this public hearing. A meeting agenda and location information are found on the Board of Supervisors website: https://www.sfbos.org/index.aspx?page=531

Board of Supervisor's Land Use Hearing – May 13, 2013 (tbc)
Supervisor Wiener has tentatively scheduled a hearing at the Land Use Committee to consider adoption of the proposed Duboce Park Landmark District. Residents, property owners, community stakeholders, and members of the public are invited to share their opinions at this public hearing. The Clerk of the Board of Supervisors will send a hearing notification mailer to property owners and residents 10 days in advance of the confirmed hearing date.

Department Response to Recent Flyers
The Planning Department developed a response to address inaccurate information contained in a series of flyers circulating the neighborhood regarding the proposed Duboce Park Landmark District. The goal of the document is to correct the record and provide information to assist residents and property owners in understanding the review process for alterations in landmark districts and in developing an informed opinion regarding the proposed district.

Links to the Department's case reports, which include results from the online questionnaire and a draft of the Landmark District Designation Report, are found here:

The Board of Supervisors will consider the proposed designation at a future date. Residents and property owners will be notified by mail of this future hearing.

At its December 5, 2012 hearing, the Historic Preservation Commission (HPC) initiated designation of the proposed Duboce Park Landmark District. A second hearing to consider a recommendation of approval of the designation to the Board of Supervisors is scheduled for Wednesday, December 19th, 2012. See notification flyer for details. At the December 19th hearing, the HPC will review and discuss the proposed levels of review, crafted with neighborhood input, for future alterations to buildings within the district. Property owners, residents, and other stakeholders are encouraged to participate at this hearing.

The Department and Supervisor Scott Wiener hosted the final community meeting focused on the proposed designation on November 1, 2012. Topics included:

Drop by for the final community meeting on the proposed Duboce Park Landmark District designation. Department planners and Supervisor Scott Wiener will be on hand to discuss recently adopted amendments to the Mills Act and expanded access to property tax deductions, the proposed alteration review process, the upcoming hearing schedule, and opportunities for public comment, including a community poll.

The final community meeting is Thursday, November 1, 2012 from 6:30pm-8pm at the Gazebo Mtg. Room at the CPMC Hospital, Davies Campus. The Gazebo meeting room is located between the main hospital building (North Tower) and the South Tower.

In the coming months, Planning Department staff will follow-up on issues raised at the December 7, 2011 Drop-In event and community discussion. These issues include, but are not limited to, clarification of "visibility" at the rear of certain buildings adjacent to the park; potential fee caps; the visibility of solar panels; and potential means to ensure neighborhood input on the proposed landmark district designation.

Also, given the number of Drop-In attendees who expressed concern about issues that are not impacted by landmark district designation, the Department will produce an FAQ specific to the proposed Duboce Park designation. Key facts to be included in the FAQ:

The Department is also working with Supervisor Scott Wiener, the Historic Preservation Commission, and the Assessor's office to improve the process and number of Mills Act contracts.

On November 30, 2011, the Department mailed residents and owners of properties located within the proposed Duboce Park Landmark District a packet of materials related to the proposed designation, including a framework for review of future alterations to district properties, included in the mailing packet.

All residents, owners, and stakeholders are invited to the December 7th Drop-In event at the Harvey Milk Center. Planning Department preservation planners will be on hand to answer questions and hear feedback regarding the revised framework for review of alterations.

On September 20, 2011, the Department hosted an interactive workshop focused on proposed levels of review for alterations to properties included in the proposed Duboce Park Landmark District. The goal of the workshop was threefold:

The feedback we received at the workshop and the subsequent Ask a Planner event was invaluable and is being used to guide revisions to the designation ordinance. Many scopes of work were identified that will not harm the character of the district. The Department is proposing to significantly scale back the level of review for these scopes of work, including proposed alterations at the rear of properties. The Department is also proposing to clarify and simplify definitions of specific terms and scopes of work.

The Department plans to mail these revisions to all property owners and tenants in November and to host a neighborhood drop-in event in early December.

Additional information on the 20% Tax Credit and other financial incentives for preservation are included in the National Park Service's Historic Preservation Tax Incentives brochure.

Over 50 people joined the Planning Department on July 16, 2011 for three walking tours highlighting the development history and architectural styles of this unique neighborhood. Many buildings in the proposed District are designed in the Queen Anne style. Several buildings in the proposed District directly abut the park. This relationship of buildings to the adjacent park is highly unusual for San Francisco -- it is one of the few parks without a roadway separating the buildings from park land. A row of houses on Pierce Street built by Fernando Nelson.

Duboce Park DPR523-D Form
This district evaluation form provides a detailed history of the development of the Duboce Park neighborhood and includes a list of identified contributing properties. The Landmarks Preservation Advisory Board adopted the survey findings in 2009.

Landmarks FAQ
This FAQ provides an overview of the Landmark designation process and includes answers to common questions related to how designation impacts individual properties.

1905 Sanborn Fire Insurance Map
This map provides a snapshot of the neighborhood in 1905.