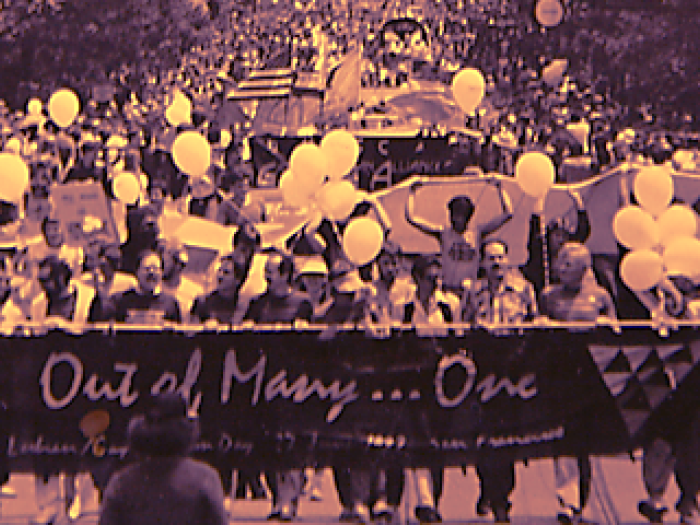 Sites that tell the stories of LGBTQ communities can be found in neighborhoods, public spaces and individual buildings throughout the city. A team of historians, in partnership with the GLBT Historical Society, is developing a citywide historic context statement to document lesbian, gay, bisexual, transgender, queer (LGBTQ) history in San Francisco.

Focusing on the 19th century through the 1980s, the Citywide Historic Context Statement for LGBTQ History in San Francisco will be distributed publicly and will be used by community history advocates and city planners. The final document will provide a foundation for identifying, interpreting, and, in some instances, landmarking historic places.

What is the Focus of the San Francisco LGBTQ Historic Context Statement?

The overarching theme will be the formation and development of the city's LGBTQ communities from their roots in the 19th century through the AIDS crisis in the 1980s. The geographical scope will be citywide.

Themes to be addressed will include same-sex social and sexual relations in the 19th century; the influence of 1920s bohemian culture; the establishment of social gathering places in 1933 after the repeal of Prohibition; the effects of World War II; police harassment, bar raids, lawsuits and the consequential formation of gay and lesbian rights organizations in the 1950s; formation and establishment of various LGBTQ communities in neighborhoods throughout the city; LGBTQ rights movements in the 1970s; and the AIDS crisis in the 1980s.

This project builds on the pioneering efforts of the organization Friends of 1800 that produced the nation's first LGBTQ historic context statement in 2004; titled "Sexing the City," the report is available as a 23-page PDF.

The Citywide Historic Context Statement for LGBTQ History in San Francisco was initiated in September 2013 and adopted by the Historic Preservation Commission on November 18, 2015.

LGBTQ history is best told by the people who have lived it—you can help this project reflect the diverse places that tell the stories of LGBTQ experiences in San Francisco. Where was the heart of your LGBTQ community? Where did you go to house parties? What was your favorite bar or club? Where did you shop for books, music and fabulous clothes? Where did you attend activist meetings or go to cultural events? The project team is particularly interested in hearing from people with information about sites important to LGBTQ communities of color, transgender people, the bisexual community, and other under-documented groups within the LGBTQ communities.

To share your story or for more information on the project, please email the project team at sflgbthistory@gmail.com.

To be added to the mailing list and kept informed of the project, please send an email request to sflgbthistory@gmail.com.