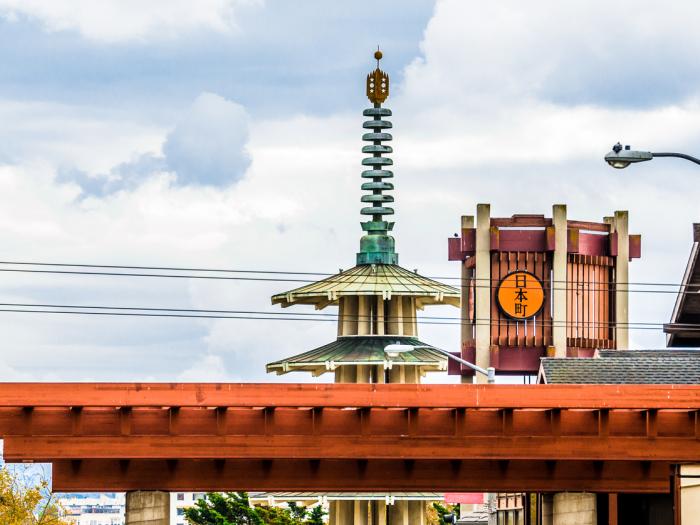 Built in 1950, 3778 Washington Street is one of only two buildings in San Francisco designed by internally renowned master architect Erich Mendelsohn. It retains high integrity and reflects the influence of International Style and the Second Bay Tradition. It is one of Mendelsohn's final designs. Built in 1950, the Sailors' Union of the Pacific Building was designed as the headquarters for the Sailors Union of the Pacific, as a center of community life, and as a monument to sailors. No other structure in San Francisco so effectively represents the status of seafaring and waterfront labor than the Sailors Union building. The building is significant due to its striking Moderne style and its cultural association with San Francisco's labor movement. Two of the former school buildings associated with Congregation Emanu-El are under consideration for Landmark designation. The original school building at 1337 Sutter Street was constructed in 1910, while the adjacent school annex at 1335 Sutter Street was built in 1918. The annex later housed the Grabhorn Press, a significant printing house. Both buildings are significant for exceptional architecture and for strong cultural associations. Built in 1937 as a Works Progress Administration project (WPA), the Sunshine School was originally constructed as a school for disabled children. It was designed by architects Martin Rist, Charles F. Strothoff, Smith O'Brien, and Albert Schroepfer in a Moorish-Byzantine inspired style. The school is significant for its architecture, its association with the WPA, and its association with Franklin Delano Roosevelt's schools for disabled children. Built in 1937 as a Works Progress Administration project, the Samuel Gompers Trade School was designed in the Streamline Moderne style by architects Masten & Hurd. Influenced by the International Style, the school features striking glass brick-clad stairwell towers. It is currently part of the recently constructed City College Mission Campus complex. Built in 1956, 2 Clarendon Avenue is a rare example of a single-family residential building designed by the local firm Anshen + Allen. The building, located in the Twin Peaks area, is an excellent and unique example of Modern residential design. Built in 1905, the New Era Hall served as a rental hall for fraternal organizations lacking their own meeting spaces. It was designed by master architect August Nordin and is an excellent example of a turn-of-the-century mixed-use building. Built circa 1875, this Gothic-inspired single-family residential building is one of the earliest buildings constructed in the Market and Octavia area. The Planters Hotel was designed by Salfield and Kohlberg and constructed in 1906. The building is a rare example of commercial and hotel architecture in the South of Market district built immediately after the 1906 Earthquake and Fires. Its wood frame construction, and wood cladding, is also rare as such construction was disallowed in the aftermath of the fires. Built in 1930, the Phillips & Van Orden Building was designed in the Art Deco style by architects Henry H. Meyers and George R. Klinkhardt. The building is significant for its architecture and for its association with the Phillips & Van Orden Company, an important publisher and printer in San Francisco, itself the most important publishing center in the West, which occupied the building from 1930 to 1947. Built in 1957, the Marine Firemen's Union Headquarters (Pacific Coast Marine Firemen, Oilers, Watertenders and Wipers Association) was designed in the Late Moderne style and includes significant interior and exterior murals. The building continues to serve as the administrative headquarters and hiring hall for the Marine Firemen's Union, which was founded in 1883 and reorganized in 1907, and is one of the oldest and most important maritime unions based in San Francisco. The Peace Pagoda and Plaza are iconic features of the Japantown neighborhood. Designed by Osaka architecture professor, Dr. Yoshiro Taniguchi, the Peace Pagoda was completed in 1968 as a gift to San Francisco from the people of the city of Osaka, Japan. As with the rest of the Japan Center, the architecture of the Pagoda is influenced by traditional Japanese designs interpreted in contemporary forms and materials. To learn more about this unique structure, click here. The Japantown YWCA exemplifies the efforts of Japanese Americans to address social needs in their community. Barred by segregationist policies from using other YWCA facilities, the Japantown YWCA appears to be the only structure purpose-built by and for Issei women in the United States. It was designed by the renowned architect, Julia Morgan, and completed in 1932. Kinmon Gakuen (Golden Gate Institute) was created in 1911 by the Japantown community so that their children could study culturally relevant subjects, as well as the Japanese language. The current facility was completed in 1926, and during World War II was used as a processing center for Japanese Americans being sent to internment camps.