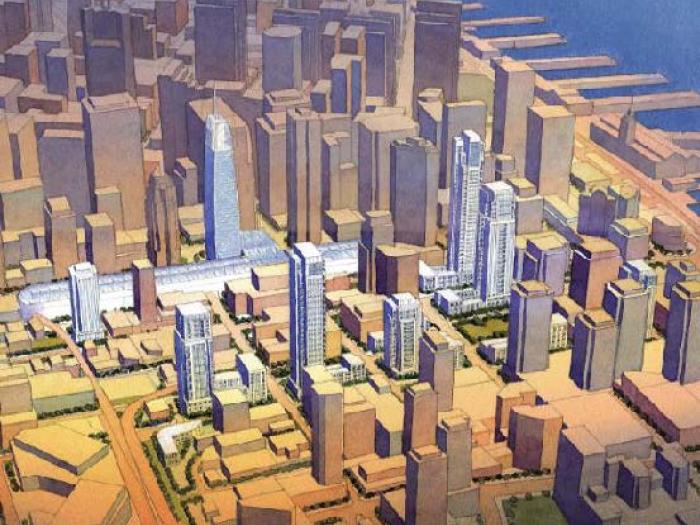 The Transit Center District Plan – a Sub Area Plan of the Downtown Plan, was adopted in May 2012 into the General Plan.

This Plan builds on the City’s renowned 1985 Downtown Plan that envisioned the area around the Transbay Terminal as the heart of the new downtown.

The City adopted the Urban Design Element of the General Plan in 1971 and the Downtown Plan in 1985, laying the groundwork for the downtown San Francisco we know today: a compact, walkable and dynamic urban center and a dramatic skyline set against the natural backdrop of the city’s hills. The Downtown Plan established the growth of the downtown south of Market Street, with its core of greatest density and greatest heights around the Transbay Terminal. At the time, the Embarcadero Freeway created a sharp southern edge to the downtown south of Howard Street. Since the elevated freeway’s removal, the City has undertaken several major planning efforts for new downtown neighborhoods (including Rincon Hill and Transbay) and infrastructure investments (Transbay Transit Center). These changes, as well as the fact that significant growth has happened in the 20 years since the Downtown Plan was adopted, demand a new look at the land uses, urban form and public realm of the downtown core. This planning effort is intended to shape the next generation of downtown growth; it will build on the core cherished principles of city building at the heart of the Urban Design Element and Downtown Plan.

In early 2006, a Mayor’s Interagency Working Group reviewed development assumptions in the existing Transit Center Program to determine the appropriate planning response to this facility in the heart of downtown San Francisco and to assess ways of securing additional funding for the Program. This brief assessment concludes that raising certain height limits and increasing development potential in the area would be consistent with the City’s vision for the Transit Center district. It identifies a potential for generating additional funds for the Program through increased tax increment, land sales, and assessments, which would result from such changes in controls of land use and urban form. The Working Group also identified the possibility for air-rights development at the 4th/King rail station and yards to provide additional funding for the Program. 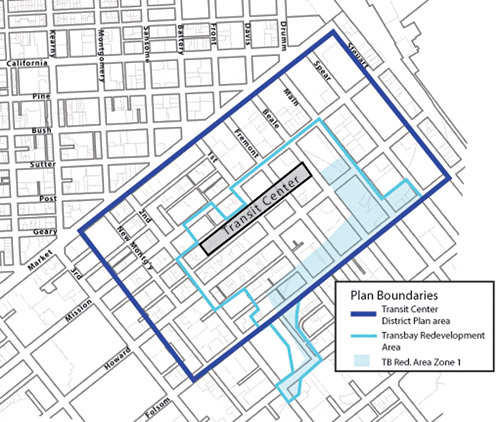 The boundaries of the study area for the Transit Center District Plan are roughtly Market Street on the north, Steuart Street on the east, Folsom Street on the south, and mid-block between 3rd and New Montgomery Streets on the west. The Plan will not affect the adopted land use or development controls for Zone 1 of the Transbay Redevelopment Area.

The Transit Center District Plan will build on the City’s renowned 1985 Downtown Plan that envisioned the area around the Transbay Terminal as the heart of the new downtown. This new effort will analyze land use and urban form responses to the maturation of the southern side of downtown since 1985 and the infrastructure investments now planned. Following detailed analysis and computer simulation (e.g. urban form, shadow, wind, circulation), the study will produce new planning policies and controls for land use, urban form, building design, and public realm improvements for private properties as well as for properties owned or to be owned by the Transbay Joint Powers Authority in and around the adopted Transbay Redevelopment Project Area and Transbay Terminal. The study will also propose a mechanism for directing some financial benefit from any increases in development opportunity to the construction of the Transit Center Program and other public amenities and infrastructure in the area.