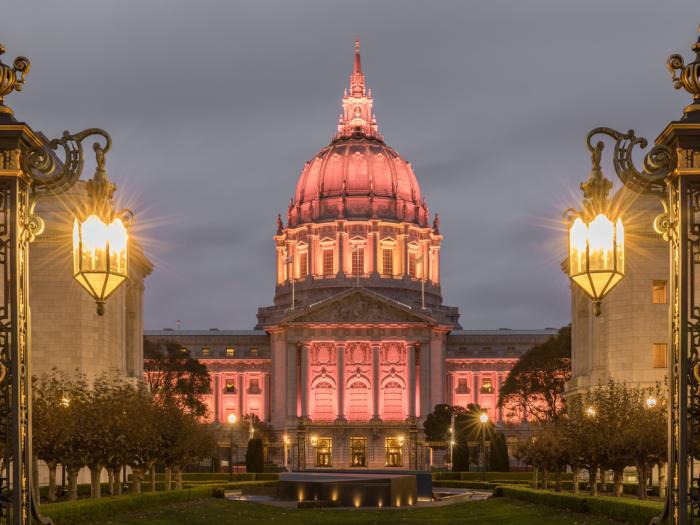 The Civic Center Cultural Landscape Inventory provides information about the historic landscape features that contribute to the Civic Center Historic District.Cultural landscape studies focus on the elements that express cultural values and highlight the history of a site. In Civic Center, these elements include public plazas, trees, pathways, lighting and fire boxes – features that serve to beautify the district, provide spaces for gathering, contemplation and rest, including the formal site planning elements which make the Civic Center an important center of civic activity in San Francisco. The 15 blocks of San Francisco's Civic Center Historic District contain many prominent cultural and governmental buildings and open spaces located in the heart of the city. Nearly destroyed in the 1906 Earthquake, it was rebuilt beginning in 1915 to serve as the site of significant historic events, including the Panama-Pacific International Exposition, the formation of the United Nations, the United States Peace Treaty with Japan, and numerous civic protests and social movements, such as those associated with the Vietnam War, the House Un-American Activities Committee, the White Night Riots, and the gay rights movement.

Beaux Arts style civic buildings such as City Hall and the Veterans Building, and Beaux Arts and Modern-era designed public spaces such as the War Memorial Courtyard, Civic Center Plaza, and UN Plaza help convey the significance of the district in representing the history of the area. Over the course of two years, Planning Department, Recreation & Parks Department, and Public Utilities Commission staff, with the assistance of the planning consulting firm MIG, Inc. assessed the significance and historic integrity of the cultural landscape features of Civic Center using archival research and on-site surveys. The survey information was consolidated as a Cultural Landscape Inventory report for the entire district. This project fills in the gaps of the previous surveys and historic designation documentation to provide a comprehensive understanding of the Civic Center and all of its associated features. The Civic Center Cultural Landscape Inventory provides a study of the environments and surroundings that contribute to or enhance the cultural heritage of the Civic Center Historic District. Documented features include courtyards, statues, trees and vegetation, fire boxes and fire hydrants, curbs and pathways, lighting fixtures, utilities, and others. The Civic Center Cultural Landscape Inventory provides critical information necessary for future planning and design efforts within Civic Center by those who own, manage, and care about this unique historic place. The information presented in the CLI will help inform planning decisions within the district and encourage consistent design treatments and maintenance of the Civic Center Historic District. Projects within Civic Center are managed and stewarded by various groups including: the San Francisco Planning Department, Recreation & Parks Department, Public Utilities Commission, Municipal Transportation Agency, Department of Public Works, and local partners.

The neighborhood data behind this map can be downloaded from SanFranciscoData.