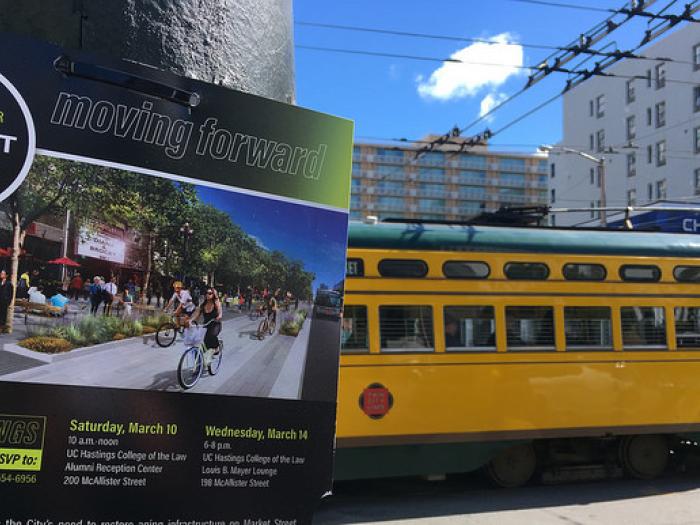 A public hearing on the Better Market Street Draft EIR was held by the Planning Commission on April 4, 2019 and the public comment period for the Better Market Street Draft EIR closed at 5:00 p.m. on April 15, 2019. The Planning Department prepared a Response to Comments Document which is now available and located on the Supporting Info tab. The Planning Commission certified the EIR at a noticed hearing on Thursday, October 10, 2019. San Francisco Public Works and the San Francisco Municipal Transportation Agency approved the project on October 15, 2019.

The project sponsor, San Francisco Public Works (Public Works), in coordination with the Citywide Planning Division of the San Francisco Planning Department and the San Francisco Municipal Transportation Agency (SFMTA), proposes to redesign and provide various transportation and streetscape improvements to the 2.2-mile segment of Market Street between Octavia Boulevard and Steuart Street. The proposed project has been developed through an extensive public outreach process that has defined integrated design priorities for Market Street, including improving mobility, enhancing access and the public realm experience, reducing conflict and friction between travel modes, and establishing a unique identity. The initial study for the proposed project, published on March 30, 2016, considered the following three alternatives and two design options:

Since that time, Public Works, SFMTA and the Planning Department have considered public input and evaluated the feasibility of these alternatives and design options, including whether they would avoid or substantially lower one or more significant impacts of the proposed project, and to what degree they would meet the project objectives.

In general, the proposed project would continue to provide four travel lanes on Market Street, with two center lanes and two curb lanes between Franklin and Beale streets. More than four lanes west of Franklin Street and three lanes east of Beale Street would be provided. The width of the vehicular travel lanes would remain approximately the same as existing conditions. New sidewalk-level bikeways would be installed in each direction on Market Street between the curbside lanes and sidewalks, and a new street-level parking protected bikeways would be installed on Valencia Street between Market and McCoppin streets. New loading zones would be created either near or at the same location as the existing loading bays.

If you have general questions regarding the environmental review for this project, please contact: