The Final Environmental Impact Report for the Portsmouth Square Improvement Project was certified on January 13, 2022. See details on the Documents tab.

Portsmouth Square – San Francisco's first public space, now widely known as "the heart of Chinatown" – was last redesigned in the late 1980s, and portions of the space no longer meet the recreational and social needs of the surrounding neighborhood and City. In addition, the surrounding streets carry large numbers of pedestrians into the Square and neighborhood and are in need of improvements that enhance safety, access, and comfort. The goal of the Portsmouth Square Area Project is to create an enhanced public space and streetscape that is dynamic, multicultural, adaptable to diverse users and events, and reflective of local culture and history. 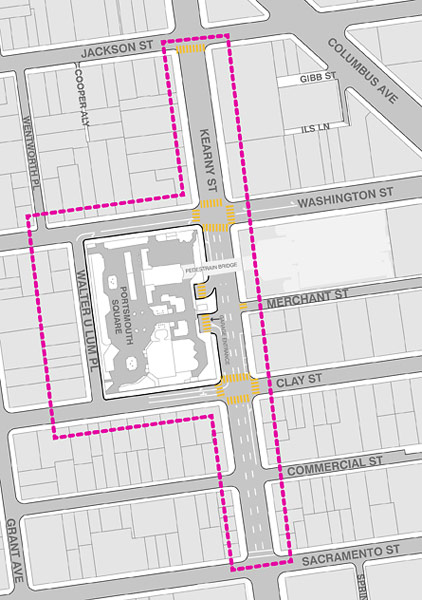 The Project Area will consider Portsmouth Square as well as its connection to surrounding streets, incorporating a buffer on all four sides of the Square and Kearny Street from Columbus to California Streets. The Square itself is owned, programmed, and maintained by the Recreation and Park Department.

Additional elements that require detailed examination within the study area include: 1). the pedestrian bridge connecting the Square to the Chinese Culture Center of San Francisco, and 2). the Portsmouth Square Parking Garage, a four-level underground parking garage located beneath the Square.

Portsmouth Square: From San Francisco's First Public Space to "the heart of Chinatown"

Founded in the early 19th century, Portsmouth Square predates the city of San Francisco and was originally a modest dirt plaza that served as the civic and commercial hub of the early settlement of Yerba Buena. During the City's founding and remarkable transformation from the mid-19th century onward, the square served as a backdrop to some of the most important moments in city and state history: the site of the first City Hall and California's first public school; the rise and fall of the Gold Rush; a staging ground and place of refuge after the 1906 earthquake; and countless festivals, parades, and other affirmations of civic pride.

Today, a visit to the square quickly reveals why the dynamic public space is now better known as both "the heart of Chinatown" and "Chinatown's living room." Nestled amidst office towers and neighborhood shops, Portsmouth Square provides a much-needed relief from the crush of people on nearby streets – Chinatown is the most densely-populated urban area west of Manhattan, and accessible parks and open spaces are in limited supply. The Square provides a gathering space where residents can build a sense of community through an array of cultural, recreational and social activities – everything from tai chi and Chinese line dance lessons, to informal socializing with neighbors, to active play at the playgrounds, to afternoon card games. In addition to the critical role the square serves for local residents, Portsmouth Square continues to attract visitors from around the region and the world, hosting frequent walking tours, festivals, and other special events.

The Portsmouth Square Area project will build on these opportunities, enhancing the square's role as the heart of the neighborhood and honoring the history and culture of this vital public space.

The concept design was unanimously approved by the San Francisco Recreation and Parks Commission on January 20, 2022, and that commission adopted the statement of overriding considerations and mitigation monitoring and reporting program.