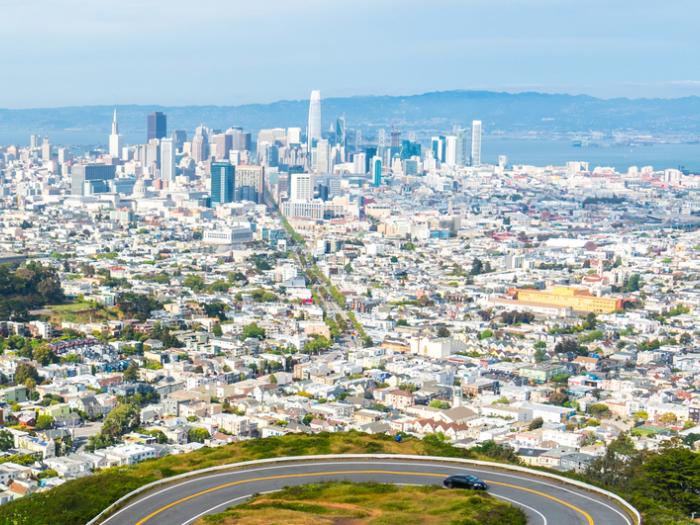 The General Plan is the embodiment of San Francisco’s vision for the future, serving to guide the City’s evolution and growth over time. It provides a comprehensive set of objectives and policies that influence how we live, work, and move about, as well as the quality and character of the City. The General Plan reflects community values and priorities through its public adoption process, ensuring both private development and public action conform to this vision.

In addition to planning the physical city, the City Charter requires consideration of social, economic and environmental factors. General Plan provisions found in the Charter consider regional issues as well and urge the Department to “include plans for systems and areas within the Bay Region which have a planning relationship with the City and County.”

The General Plan guides public decisions and investments that shape the functionality of the City. The Charter requires that changes to infrastructure and public assets as well as plans for redevelopment be consistent with the General Plan.

The most recent guidance from the State Office of Planning and Research recommends that new amendments to the General Plan focus on four key themes: 1) climate change; 2) economics; 3) healthy communities; and 4) equitable opportunities.

General Plan Referrals are required for certain types of proposed City actions. Referrals enable the city to check that proposed changes to the city are consistent with the General Plan’s vision, objectives, and policies.

Per the San Francisco Charter, “the following matters shall be assessed for conformance with the General Plan, prior to passage by the Board of Supervisors:

The General Plan is composed of an Introduction, 10 “Elements” or topic-specific chapters, and 21 geographically specific plans called “Area” or “Sub-Area” Plans.

The Introduction summarizes the plan’s highest-level goals in six statements.

Approved by voters in 1986, Proposition M requires that the City shall find that proposed alterations and demolitions are consistent with eight priority policies set forth in Section 101.1 of the Planning Code. These eight policies are also included in the introduction.

The state mandated elements include:

Over time, the City has adopted numerous Area Plans which lay out guidance about growth, circulation, amenities, and other factors for specific areas of the city. 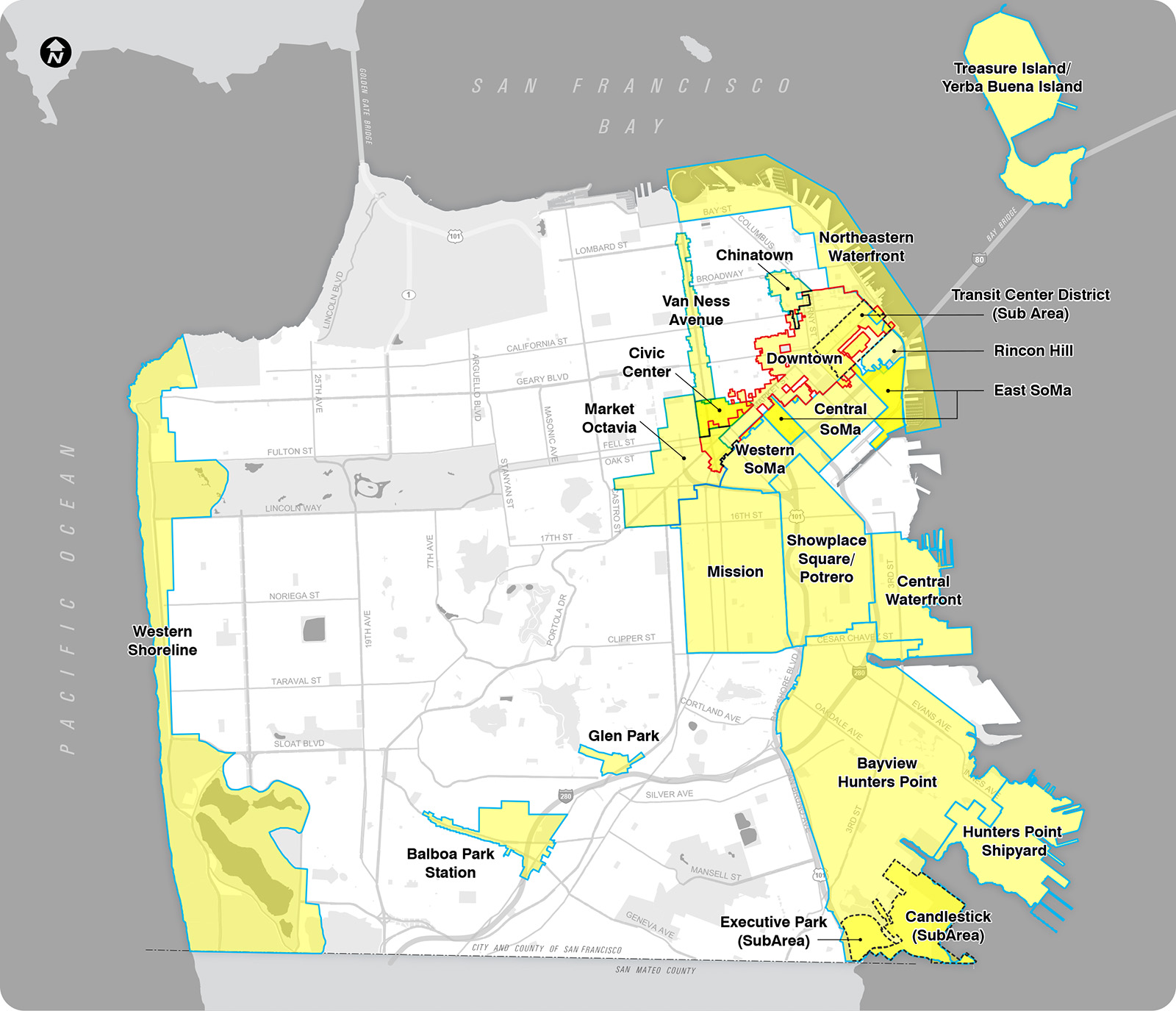 The Planning Commission decided to formally establish the Planning Department and San Francisco’s first General Plan was adopted by the Commission in 1945.  The Plan was intended to serve as a living document as “the first step in the continuous process of planning.” The plan consisted of three chapters: Transportation and Utilities; Land Use Plan; and Redevelopment of Blighted Areas.

The General Plan was revised, with new plans moving toward halting the spread of freeways, fighting the destruction of redevelopment, and recording principals for urban form. The 1971 Urban Design Plan sought to protect the City’s existing fabric and cultivate human-scale amenities.  Created at a time when most American cities sought to emulate the suburbs, it proposed a radical reinvestment in the urban fabric and urban livability.

The City began a major effort to sculpt downtown growth while keeping high-rises out of Chinatown, North Beach and the Tenderloin. The resulting Downtown Plan sought to leverage developer’s desire to build towards defined public benefits through impact fees for transit, open space, and child-care. It also required public amenities such as public art and privately-owned public open spaces or POPOS. This effort was followed by growth management in the downtown adjacent neighborhoods with plans for Chinatown, South of Market and Van Ness Avenue.

The General Plan was updated with comprehensive plans for urban neighborhoods well-served by transit, shifting the focus to finding more space in mid-rise, mixed-use neighborhoods where new housing could be sustainably integrated into complete neighborhoods. The plans for the Market & Octavia, Central Waterfront, and Balboa Park Station Areas moved street designs away from auto-centric uses, and reinforced pedestrian-oriented buildings similar to the City’s historic building stock. 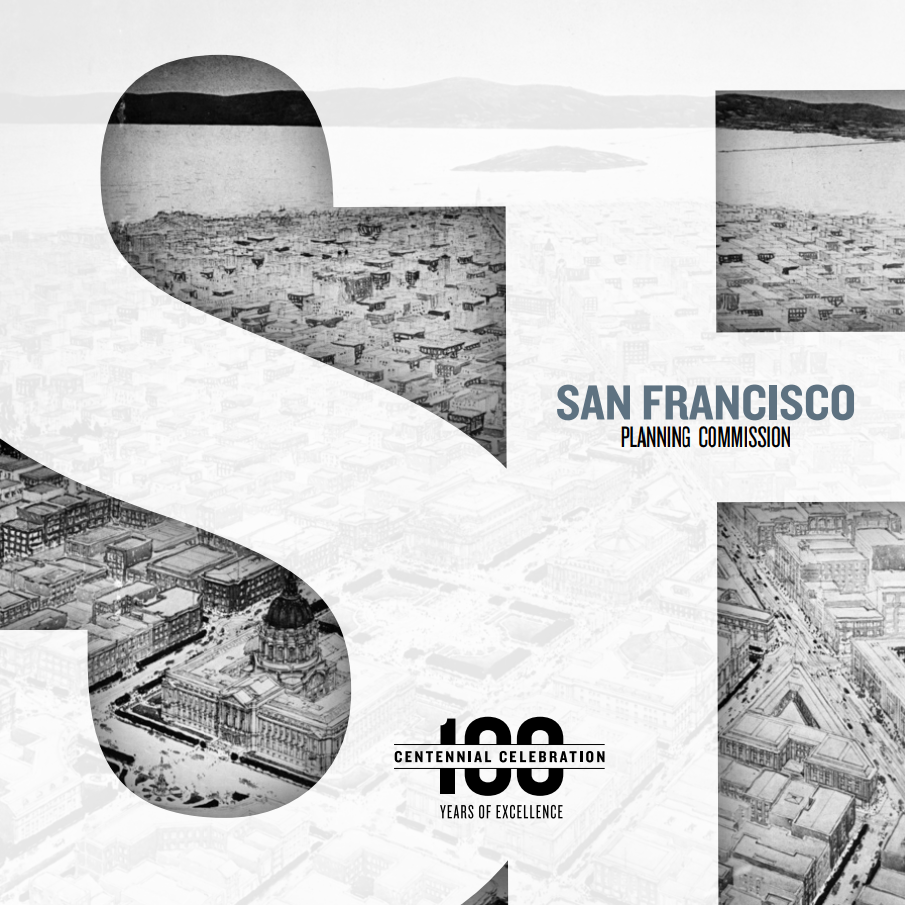