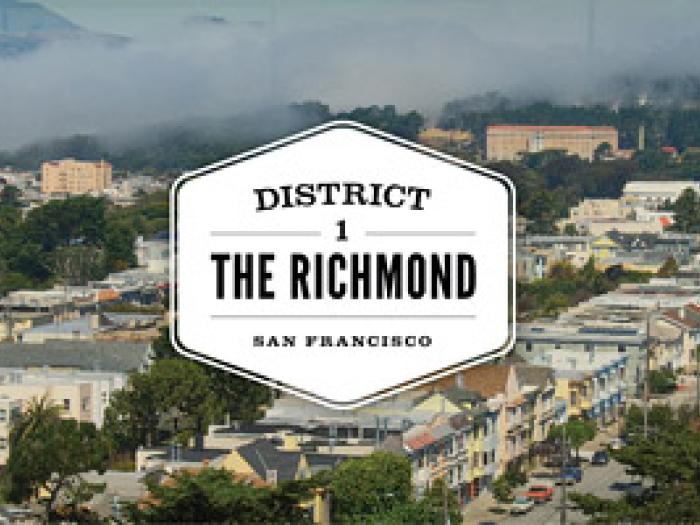 The Richmond District Strategy aims to direct this change to benefit the community as the neighborhood evolves and to ensure a sustainable and high quality of life for the Richmond District now and in the future. Started by former District 1 Supervisor Eric Mar, in collaboration with San Francisco Planning, this effort provides a comprehensive understanding of the District's current trends, needs, and opportunities and is part of the Invest in Neighborhoods initiative.

Since 1980, the Richmond District has seen slow population and housing growth. In recent years, the District has been experiencing changes similar to many other neighborhoods throughout the City and the region due to the Bay Area's booming economy. For example, in the past five years, housing costs have increased significantly, share of higher income households have doubled, and there is still a wide disparity in income earned.

In 2014, San Francisco Planning conducted an analysis of existing data on topics such as demographics, zoning and land use, housing, small businesses, development trends, transportation, public space, and community facilities. The results were published in the Existing Conditions Report in September 2015. We followed this analysis by speaking directly with the community who live, work, and visit the Richmond through a Community Needs Assessment Survey. The Survey was opened from October 2015 until the end of January 2016 - where we received over 1,400 responses with the majority of the respondents being residents of the Richmond District. The results of what we learned were detailed in the Community Needs Assessment Survey report.

Since taking office, Supervisor Sandra Fewer has engaged in the Richmond District Strategy and identified a need for deeper outreach to harder to reach community members in the Richmond. Supervisor Fewer is currently engaging youth, seniors, non-English speaking mono-lingual residents, and other underrepresented community members.  The results of this effort will complement the findings of the Richmond District Strategy and inform the next steps.

Following this outreach, the next steps will develop tangible actions and determine the priorities to achieve the community goals, which will resume Spring of 2018. This effort will involve working with a representative group of Richmond community members.

In the meantime, San Francisco Planning is initiating a focused effort on Golden Gate Park edges to further advance Goal No. 9: A neighborhood where parks, especially Golden Gate Park, are safely accessible for pedestrians and cyclists.

San Francisco Planning is coordinating with other agencies such as SF Recreation and Parks Department and SFMTA to kick off this effort, and will engage the community in the surrounding neighborhoods. Please stay tuned for more information later in the Fall of 2017 and we look forward to seeing and talking with you soon.

The following goals represent the vision for the Richmond from the community members who participated in the program over the past couple of years:

Follow Up Conversation: Establishing Community Goals for the Richmond (February 2017)

The Survey asked people to respond to questions about their needs and opinions on the following topics: housing, development, transportation and streetscape, local commercial areas, parks and open spaces, and community facilities. The results are provided in a full report as well as a four page summary.

These materials highlight our analysis and were presented at multiple outreach events. They are summared by the following topics:

​You can click on each topic to view the board summarizing the findings. These boards are also available in Chinese | 中文.

I didn't know about the Survey! How can my voice be heard?
Surveys are used to gain an understanding of a topic, relying on a sample of the population. During the four months our survey was open, we conducted extensive outreach to get a larger sample, but we couldn't talk to every resident. At the same time, the survey is just one tool in our outreach toolbox. We continue to speak to the community for their involvement through a series of meetings and online outreach. Please help us get the word out!

Was the Survey representative?
While certain subgroups were not as well represented in our sample when compared to their share of the district's population according to census data, the sample size for each subgroup was large enough to allow us to generalize our findings to a statistically significant confidence level (90 percent confidence level and 6 percent margin of error). You can find more details for each subgroup here.

Throughout our outreach, we collected all the feedback and comments that were received: